Just Wait 'Til Your Dad Gets Home 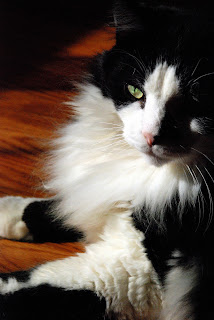 I'm going to scold you now. It's really more for my therapeutic benefit than for any real cat behavior management, since you can't read, and if you could, your tastes would run more toward the "Gaslight Your Owners" blogs than this one.

Let me preface this scolding by saying that I do understand the irresistible draw of the sunbeam. Totally. I get it. Especially on this, the day after our national day of gluttony. I'm having trouble staying out of them myself.

But I now point out two things:
I'm tired of chasing you out of the room. You know this. Clearly, you are taking advantage of my post-gluttony sloth (two... two... two deadly sins in one) and my susceptibility to the searing glare of your all-powerful cute.

So stop it. Stay out of the living room. Find another sunbeam. Because Dad will be home soon, and he is immune to all of your feline manipulations, including the patented crazed hypnotic stare. He, unlike me, will not be assimilated.

It's for your own good. 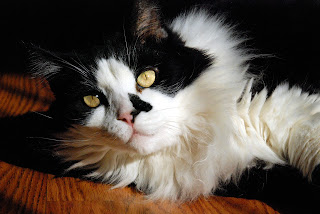 Email ThisBlogThis!Share to TwitterShare to FacebookShare to Pinterest
Labels: Rex

The Detritus of Thanksgiving 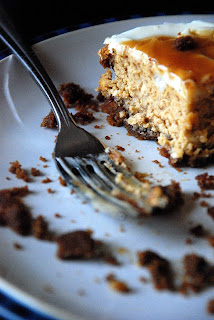 Our Thanksgiving meal provided a wealth of opportunities for food photography.

These opportunities were unceremoniously shoved aside in favor of unabashed face-stuffing.
When I was ready to pick up a camera, all that remained was this, s tiny chunk of pumpkin cheesecake. Here, I document its last moments.

(I learned a valuable, and obvious, lesson from this. Don't eat your subject matter until you're sure you have the shot you want.)
Brain dump by Kelly at 10:35 AM No comments:

One More Time, With Flavor

Every city, regardless of its size or culinary sophistication, has food critics. If there's a newspaper, there's a food critic, even if the extent of the journalistic scope is the Shopper's News or a resident association newsletter.

I live in Little Rock. It's not exactly an epicurean Mecca, but it boasts an impressive list of top-flight restaurants that is surprising for a city this size.

And for the most part, the local restaurant critics have evolved with the culinary landscape, resulting in reviews that are generally articulate, educated, naunced, and spot-on.

But there are exceptions.

We set out tonight to dine at Graffiti's, a small Italian restaurant that I remember fondly from a New Year's Eve dinner I had there way back in 1991. Since it had been so long since I'd been there, I checked out reviews online. They were all quite glowing, describing a "fun atmostphere" and "trendy menu." Over the years, it has become a "Little Rock institution," by God.

Which brings me back to the point I started out making about restaurant reviews in cities that are not cuisine-forward (thought I'd never get there, didn't you): it seems that restaurants can become ineligible for bad reviews simply by virtue of their longevity as long as there are readers around who remember their glory days.

The best that we can say about our experience at Graffiti's was that it wasn't offensive. We started with the Italian quesadillas and were actually pleased by the flavor. There was a nice little kick to it from a spice that we couldn't identify -- but it worked well with the cheeses and pepperoni. I had the summer salad, which is apparently a staple of the menu; our server tossed out the term (no pun intended), then said, "Do you know it?" I demurred, so she described it. Later, a couple of ladies at an adjacent table got the same spiel but said that they did know it, and they didn't get the description.

It was ordinary but tasty (I'm a sucker for salads with fried chow mein noodles). I'm pretty sure I can replicate it at home.

The real disappointment was with the entrees. My linguine with escargot was woefully underseasoned (although the serving size, even for the half-order, was generous). Vito described his beef tenderloin as "well-cooked", but the vegetable medley accompaniment was overdone and the pesto pasta was just ordinary.

Our server was friendly and attentive but couldn't knowledgeably discuss the wine list. She did tell us about their small selection of half-bottles, which I found fascinating, since it appeared to solve the problem Vito and I usually have when we contemplate wine by the bottle -- I usually order food that needs a white, he orders food that pairs better with red. Tonight, we each got a our own half-bottle of wine that was certainly acceptable, if not orgasm-inducing (they were both the same lower-end Chilean label that we keep on hand at home when we want to have wine with our reality TV).

We arrived early, a little before six, and left between seven-thirty and eight. During that time, we watched the small dining room fill up. Every other group that came in recognized at least one other group that was already there, and the pleasantries that were exchanged smacked of the dining room at a country club where you know that anyone who came in had to be a member.

I concluded that there is a small but wealthy subsection of Little Rock that is solely responsible for keeping this place going, and that they all were either suckers for nostalgia or prefer overcooked food with little to no seasoning.
Brain dump by Kelly at 7:41 PM 1 comment:

Email ThisBlogThis!Share to TwitterShare to FacebookShare to Pinterest
Labels: restaurants

Twenty Days of Something Different

A couple of months ago, I received an email that described how I could help force the oil companies to reduce the price of gas. All I had to do was refrain from buying gasoline on May 15. That would show 'em. I would be helping to "put a dent in the oil industry."

Oh, you got that email to? Did you participate?

The only difference that staying away from the pump on any one day would make is that the gas stations would be more crowded the days before and after. And, of course, thinking, rational people would laugh at me.

It's not even effective on a symbolic level. Raise awareness? Is there anyone who isn't already highly aware that gas prices are soaring? We cringe every time we fill up, but we still fill up.

Want to send a message? Don't reschedule fill-ups - eliminate them.

Twenty Days in August is a small but growing movement in central Arkansas that challenges consumers to radically change their habits for twenty days by finding alternatives to fuel consumption.

Obvious changes include using public transportation, bicycling, or carpooling to work. Other less obvious suggestions include buying local produce and meats -- food that hasn't traveled thousands of miles to get to your table -- and coordinating trips to the grocery store so that one person is doing the shopping for a few people.

I am committed to taking the bus to work as much as I can between Aug. 1 and Aug. 20, and I'll ride my bike to the grocery store. If I do have to get the car out to run errands, I'll check with friends and relatives to see if I can pick up stuff for them while I'm out.

I expect this to eliminate at least two trips to the gas station. Eliminate -- not postpone.

The goal is twenty days. That's short enough to manage the inconvenience -- but also long enough to develop new, enduring habits.
Brain dump by Kelly at 9:46 AM No comments:

It's that time of year -- fresh berries are coming into season. Our recent CSA baskets have been loaded with fresh blackberries. So lately, I've been exploring the concept of fruit cobbler.

I turned to my mother for advice. My mom is the second-oldest of eight children born into a farming family. She is all about cooking with whatever is available and doing it all from the recipes in her head -- or making it up as she goes. The more I ask about what she's doing, though, the more she feels compelled to impose some kind of structure.

So Mom took the reins and transcribed the recipe in her head.

Bring to a simmer and cook about 5 minutes.

2 cups Jiffy baking mix
1/2 cup plus a couple TBLS milk, enough to get a sticky ball of dough

Mix together, then knead a few turns on a floured board.

Save at least 1/3 of it for the crust, roll out the rest of the dough pie-crust thin. Cut into squares and add the squares to the fruit mixture. Stir gently only occasionally and cook for about 10 minutes.

Pour into baking dish, roll out the top crust and cover the cobbler. Add some pieces of butter and sprinkle with sugar.


Two things: I cringe at the part of the recipe that calls for Jiffy Mix. I'm a big proponent of being highly involved with your food and knowing everything that goes into it, so I would advocate making the dumplings and crust from scratch. (Having said that, I now confess that my two cobbler creations relied on the Pillsbury All-Ready rollout pie crusts. After all, I advocate cooking from scratch, but I also work long hours.)

Second: I found this recipe a lot more appealing when it called for "enough water to cover", but I'm relieved to see that it still calls for such precise measurement as "enough milk to get a sticky ball of dough" and "some pieces of butter."
Brain dump by Kelly at 9:40 AM No comments: