For Whom the Rooster Crows

A joy of travel is that it is a constantly refreshing source for stories. Travel enough, and you become adept at recognizing when you are in the middle of a story in progress.  And that is thrilling.
We spent the recent July 4 holiday weekend in the whimsically random story mecca of...  Ketchum, Idaho.  And the "Once upon a time..." began. 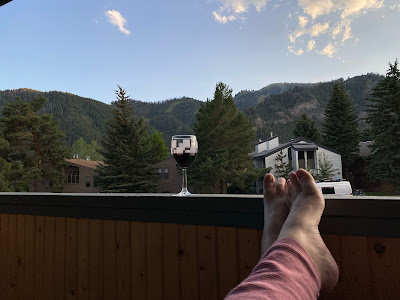 When we landed in Boise*, we made the rookie mistake of deciding to wait until we got to Ketchum to have lunch. Fast forward three hours - we’re the hangry couple on the patio of a pizza place, not speaking to each other.
Rather than engage with the spawn of Satan I married (whose Hero status was restored once I had eaten), I gazed around the intersection and spied an antique shop down the block. It was one of those “antique shops” that had lots of stuff displayed out on the sidewalk - I’m sure there were some antiques out there, but it was mostly wonderful, kitschy junk.
In the midst of all that clutter a block away, I spotted - and fixated on - a tin rooster. A rooster that I HAD TO HAVE. Because fixating on this rooster during the fragile hangry phase seemed like the lowest-risk use of my attention span.
But by the time we had finished lunch, the antique store was closed. And it wasn’t going to open again until about two hours after we were planning to leave (cue sad trombone).
This trip was loosely structured around a Hemingway theme. Which makes us seem erudite and cool, but as per our usual vacation planning process, here’s how it unfolded:
Score!
So on Day 2 (one day past the missed connection with the tin rooster), we stayed on pretty good terms by having a wonderful breakfast, then visited the Hemingway grave and memorial and talked about the Hemingway code and mythos in general.


Day 3 (two days past rooster fixation, one day before we leave), we poked around downtown Ketchum, including visiting a cool art gallery with an amazing ceramics exhibition. Turns out the gallery was one block away from the antiques store (but to be fair, everything in Ketchum is essentially one block away from everything else), so we went to look more closely at the rooster, hoping to soothe the heartbreak by discovering that up close, the rooster wasn’t all that impressive.
Instead -- 1) my fixation on the rooster deepened, and 2) the store was open!! The rooster was acquired!!
A few observations about the store:
That night - our last night in Ketchum - we had dinner at the very restaurant (Michel’s Christiania), at the very table, where Hemingway had dinner with fourth wife Mary before going home and killing himself.
In several places in the restaurant décor... roosters. 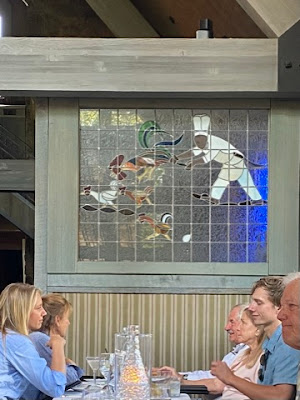 A few closing thoughts on the restaurant:
This is why I travel. 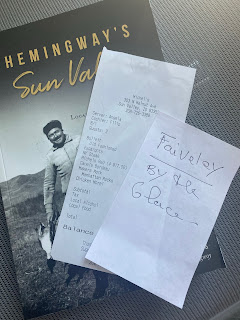 * Yes, I know Alaska flies into a regional airport that is much closer to Ketchum (SUN).  Rather... I know that now.
Brain dump by Kelly at 3:55 PM No comments: