Sappy Rerun #2 describes the trauma of taking the Golden Child to college for the first time.

As a side note -- I was fortunate to read this essay a few years ago for a Mother's Day episode of "Tales From the South" -- a wonderful podcast available on iTunes (and great fun to do).

Do You CUT the Umbilical Cord, or Carve It Away Slowly?

I hit a profound turning point in my life a couple of weeks ago. I delivered my baby boy (the Golden Child) to Indiana University to begin his freshman year. (It was probably a huge turning point for him, too, but this is all about ME.)

The actual day of the move was well-organized on the part of the school, given that 35,000 students were moving in at the same time, but it was hectic nonetheless. I had tried to structure the day so that we would have some quiet time at the end before I left him, but I underestimated the number of MEETINGS he'd have to attend well into the evening.

This was probably for the best -- I had been dreading the painful good-bye, anticipating another cut of a metaphoric umbilical chord, this time sans anesthesia.

The dramatic parting didn't happen -- we ran out of time. GC walked me to the car, obviously anxious about being late to his next meeting and eager to get there. He hugged me, gave a little wave, and headed off.

It wasn't at all satisfying. Here was this monumental moment, passing with just a squeeze and a wave.

"Bye, Punkin!" I called after him.

"Bye, Mom," he replied with impatient affection, still walking away.

One more turn of the sidewalk and he'd be out of sight. I was desperate for adequate closure.

And he was gone.

I was shocked out of my hovering ways on Day Three by a stunning realization: almost overnight, GC had become a Mumbler.

Three days into his college career, that response became, "loveyoutoomombye."

Since then, I have resisted the urge to call every day, every hour, and it's been very, very hard. He's my child -- when he's not WITH ME, he's IN DANGER. He's going to be faced with new challenges and new decisions, and he can't possibly manage without the benefit of my experience and wisdom.

But I couldn't keep calling. No, that would be intrusive. So I hacked into his computer account at the university.

I just wanted to make sure his meal points had been posted!! Really!! After all, he was going to have to figure out how get his own meals, it was going to be hard enough for him without the added burden of having to straighten out an accounting error with the Bursar's office.

Not only had the points been posted appropriately -- he had already purchased food. He was eating at college without my help. A few days later, the knife in my heart got an additional twist: he had used his campus access card with its associated funds to do laundry. LAUNDRY!! BY HIMSELF!!

I was devastated. First, the Mumbler appeared; now, this. It was almost too much to bear.

After holding out for five whole days (a perfectly respectable phone hiatus), I called on the weekend to see how his first full week of classes had gone. He mentioned in passing that he had injured his wrist.

"I was playing soccer and tripped on the ball. I landed on my wrist wrong."

"It's okay, Mom. It doesn't hurt as much anymore, and most of the swelling has gone down."

Every day, someone asks how GC is doing at college. I force a smile and say, "He's doing really well." That INGRATE.

Brace yourselves -- today, the Golden Child is graduating from college. Yes, really.

Never mind that he's taken what we diplomatically refer to as a "non-linear" path through higher education. Or that it his college career is coming to a close seven years after it began.

Looking at the man he is today -- smart, confident, kind, clever, thoughtful, with a wit-driven sense of humor -- I know that none of it was wasted time.

When my son was four, we went to a park to collect pine cones for a centerpiece for the Thanksgiving table. We were looking specifically for those big, woody brown ones, the ones you can buy by the bag at Hobby Lobby (scented with cinnamon). It was a task my son took very, very seriously.

While we picked through the pine cones on the ground, we talked. He had a big event coming up -- his fifth birthday. In his little toddler way, he was convinced that his life would suddenly change, and he would be all grown up.

"When I turn five," he told me with four-year-old decisiveness, "I'm not going to call you Mama anymore."

"Okay. What would you like for me to call you?"

He thought about this for a few minutes, looking very pensive as he tossed aside reject pine cones. "You can still call me Punkin."


***********
One Saturday morning when he was about eight, he came into my room and asked if I would play with him. I explained to him that I needed to stay in bed for a while, because I had a migraine and was waiting for it to go away. He understood and left the room quietly. About half an hour later, he reappeared at my bedside carrying a cup of hot black coffee.

"Where did that come from?" I asked apprehensively.

I took the coffee and stared at it, then stared at him. "Tell me exactly what you did."

"I went to the cabinet with the cookbooks and got the red and white one [Better Homes and Gardens New Cookbook]. I looked up coffee and followed the directions." He then told me each step he took to set up the Mr. Coffee and brew. It is, to this day, the best coffee I've ever had.

***********
When he was about ten (and I was in graduate school), he asked if I would come outside and throw a frisbee with him. I said, "I can't right now, I have to finish this paper. It's due tomorrow." He thought about this for a moment, then proved that he was 100% my son by saying, "What time?"

He went outside to play with his friends until I got finished. About an hour later, he dashed back inside, handed me a small bouquet of purple and yellow wildflowers, then dashed back out again without a word.

***********
I could provide many, many more examples of the moments of sheer joy and serendipity this child has brought me throughout his life.

He played the part of Chicken Little in a preschool play.

He learned about death via a bee in a ziplock bag.

He once declared that he could teach me to relax -- he led me to the couch, made me lie down, and declared, "Okay. Relax." (Only when he said it with his toddler speech, it was more like, "Rewax.")

When he grew into a teenager, I prepared myself for all the teenage angst and aggravation every parent endures (and which I certainly inflicted on my own parents at that age).

Instead, he became a young man who would talk to me about things that bothered him without ever becoming mouthy or disrespectful -- and would listen to my point of view, even when he was mad or frustrated. He became thoughtful, sensitive, and considerate of other people (even his parents). He also became one of the wittiest, funniest, most clever people I know -- and someone I would choose to hang out with, even if he weren't my son.

On a recent trip to Washington DC, he listened patiently while The Golden Spouse, ever the professor, gave a mini-lecture about the history and structure of the American political system. I jokingly said to the kid, "Did you get all that?" He deadpanned back, "Yes. Whenever he said I word I didn't know, I just substituted it in my head with something like 'puppy' or 'kitty' and it all made sense."

Last week, he was graduated from high school. I cried when he walked into the arena in his red cap and gown, the tallest graduate on his row. I smiled at the robust applause that burst out when his name was called (even though everyone had been admonished to hold their applause until the end). And when I watched him after the ceremony, calmly organizing his post-graduation activities with confidence and assuredness and with consideration for making everyone feel included and welcome, I rewaxed.

Congratulations, Punkin. I no longer worry about the kind of man you'll be -- I know. And I'm so very proud. 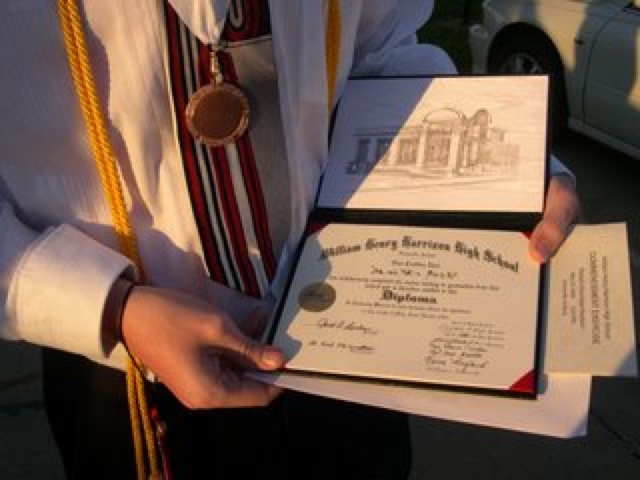