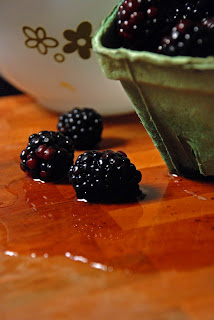 Berries have finally arrived at the Farmer's Market. Last week, we were able to pick up blueberries and blackberries.

All of the berries were incredibly plump and juicy. The blueberries didn't last long enough to be converted into anything -- we enjoyed those straight up with cream.

The blackberries, on the other hand, became cobbler (using Mom's recipe, of course). After simmering the berries and sugar, the mix seemed a little too soupy (probably because they were so damn full of juice to begin with), so I dipped out a lot of the juice before pouring it up.*

We topped it off with some homemade vanilla bean ice cream and formally welcomed the summer. 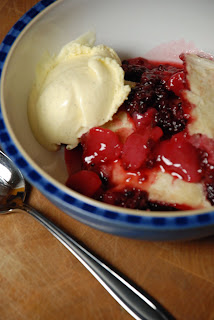 * Because we are environmentally sensitive and careful to avoid waste, we took one for the team and turned the sweetened juice into a pitcher of blackberry martinis. Oh, the hardships we must endure...
Brain dump by Kelly at 12:11 PM

Yum! Also glad to see you are continuing to shrink your environmental footprint.