One of the worst movies ever made was the 1999 film Deep Blue Sea, starring Samuel L. Jackson.

The premise is that a bunch of scientists are experimenting on sharks at an undersea lab in an effort to find a cure for Alzheimer's disease. The experiments lead to an elevation of the sharks' consciousness and intelligence... and they're pissed.

Samuel L. Jackson stars, with a supporting cast of... a lot of people you've never heard of.

And Samuel L. Jackson stars. I keep mentioning this because I'm sure that Mr. Jackson's salary accounted for an inordinately large proportion of the overall budget. Rather like the ground cardamom in the recipe for the Dimply Plum Cake. (I promise I'll have the Golden Child's college fund repaid by next semester.)

And like the cardamom, Samuel L. Jackson is responsible for the best moment of an otherwise forgettable film -- he is unexpectedly eaten by a shark. About thirty minutes into the movie. You're left looking at your watch wondering, "What else is there?"

Having another big name on the poster -- even a B-lister -- could have carried you contentedly through the rest of the film. Likewise, a nice sauce would have saved the pedestrian Dimply Plum Cake -- a sweet, buttery concoction to serve as the Edward Norton of dessert sauces. 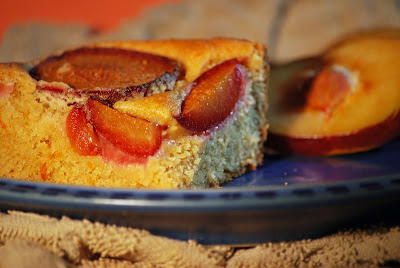 Would Deep Blue Sea have been even worse without Samuel L. Jackson? Would the Dimply Plum Cake have suffered without the investment in cardamom? We'll never know. And I'm left trying to figure out how to incorporate cardamom into all of my cooking (reference next week's creme brulee), because by God, I'm going to get my money's worth.

(This week's recipe was selected by Michelle at Bake-n. It has gotten rave reviews from other bloggers... so maybe it's just me.)
Brain dump by Kelly at 10:01 PM

ROTFL - I love your movie references! It still looks good though!

what a great post! it made me laugh. and we really didn't like this cake, so it's not just you.

What a perfect parallel to draw, and remind me never to watch that movie. I must admit, I didn't buy the cardamom, so I'll just wish you luck on using it up.

I buy my cardamon in the food co-op by weight, so I don't buy much and don't really pay much.

This was a great post, but I have never heard of the movie and if it ever comes on tv I will skip it! I skipped the cardamom but your cake looks great!

Sorry about the cake. We loved it and the cardamom, but I'm also on the lookout for recipes in which cardamom plays the starring role.
Nancy

I heart Edward Norton. I kind of think he's the new Brian Dennehy, though.

Hello from a fellow Arkie! I'm enjoying browsing around your blog, which I just found tonight.

Smart sneaky shark movies are just the greatest. The GREATEST part about DBS, for us, was the fact that these enormous, HUGE sharks were somehow invisible in waist-deep water when they were in the kitchen with L.L. Cool J.

I think that "in the kitchen with L.L. Cool J" might be the most awesome phrase I've ever typed.

Heehee. I didn't look at the price of the cardamom until checking my receipt on my way out of the store and then my eyes almost fell out of my head. Does that make me reckless with money?? I'm sorry the cake was not the revelation for you that it was for me! If you figure out some clever uses for more than 1/4 tsp of cardamom at a time, do let me know!

Funny post. I don't think sauce would improve my DP Cake. It was really dry. The batter tasted yummy but it went downhill from there.

Is there a cardamon blog out there?