Return of the Prodigal Baker (TWD)

I'm about to tell you something that you, as a reader of this blog and probably several others, already know.

I don't know how I managed in the pre-Internet days. The days when you needed a stamp to send a letter. You had to wait until 5:00 to get the latest news. And you never would have discovered that the guy you had a crush on in junior high went on to perform in a nationally touring drag show under the highly Googleable stage name of Lola Puffybuns.

Back then, if I wanted to know how to pronounce something that I wasn't sure I had ever heard, I would've looked it up in a dictionary, stared at the phonetic spelling, and wished I had paid more attention when we were being taught what those squiggly lines and accents meant. 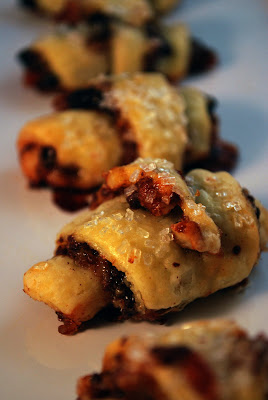 I can now talk about this week's Tuesdays With Dorie treat, because I now know how to pronounce it. So feel free to give me a call -- I've been practicing (especially the throat-clearing at the finish).

This is a fantastic cookie that comes together much more easily than it would seem, given how fancy they look. The dough has no sugar, so it relies on the filling to give it the dessert quality - which means that you can control the sweetness and complexity by changing up the filling.

There were a few tense moments while rolling the dough when I thought I was about to tear it, but it held up in spite of my enthusiasm. I refrained from tossing it like a pizza crust after the Golden Spouse gave me a shockingly loud look of disapproval.

In my defense, loading the dough was a lot like loading a pizza before baking. Unfortunately, there were shiny things in the kitchen when I assembled the first batch, so I wasn't paying as much attention as I should have been -- and I inadvertently used too many of the chocolate chips, which left me short for the second batch. I liked them better without as much chocolate, so I thought I was on to something -- but then GS raved about the ones that were chocolate-heavy.

Something for everyone, I suppose. 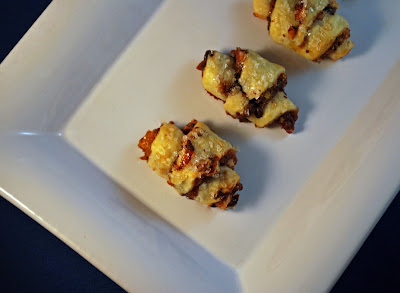 One thing I know for sure -- a dozen tasty rugelach and a tall glass of cold milk ease the trauma of finding Lola's online portfolio.

(This week's recipe was selected by Piggy at Piggy's Cooking Journal -- read about her Rugelach experience and that of the other TWD bakers in the blogroll.)
Brain dump by Kelly at 11:00 PM

Lola Puffybuns?! Haha, wow. I'd be a fan of the less chocolatey ones, but I agree, there should be something for everyone :)

OMG? Is that true about your crush?? And can i just say THANK YOU for the sound clip link? I have been grossly mis-saying rugelach all week!

(and the word below that I am to type to show i am a human is Whooptie. Funny.)

Such an interesting and funny post ...Lola Puffybuns!!! LOL LOL Tonight, I can go to bed... laughing and less stupid! LOL Beautiful participation!

LOL! I'm a fellow TWD baker, and I was thinking that it would be nice if we all could chip in and get Laurie some small token/gift for all the work she does. Would you be willing to contribute? If I can get enough people, it would only be about $1 per person. No pressure :-) Let me know! bethberg12@yahoo.com

Oh, we love the magical Internetz. My sister found one of her exes writing really, really awesomely bad poetry on MySpace. That we read aloud. We're classy like that.

Love your blog and thanks for the heads up about "ruggola". By the way, seriously, I went to high school with Lola. A bunch of us cut school one day (cover your eyes, kids) and went to M's house to swim and do things we weren't supposed to. I woke up to Boy George crooning I'll Tumble 4 Ya and seeing a pair of size 13 stilettos parading around in front of my eyes. The horror, the horror. Thanks for the time trip.

Yaaaayyyyy, Kelly is back! So happy. You were missed massively.

My exes from college all have names that already rival Lola Puffybuns. For instance, I dated a Peacock. And an Eney. Duff Eney just sounds so freaking ridiculous. And yes, he is celebrating an enormous career on Broadway now. Why do you ask?

I'll try the yogurt thing. I can't get enough of that Greek yogurt...