The Golden Child is in town this week, which certainly warrants taking some time off from work. However, since he is a teenager, there was no point in taking MORNINGS off, so I'm working half-days. This means that I have to cram a week's worth of meetings into 20 hours, which is making me tear my hair out.

So my TWD post this week is going to have to be a quickie.

This week's task was Black and White Banana Loaf, selected by Ashlee at A Year in the Kitchen. In theory, this is a tidy, elegant, coffee-cake type loaf with a beautiful marbled presentation. In practice -- not so much. 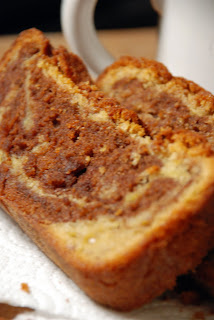 Ashlee had the same issues I had, but she persevered. She adjusted the recipe a bit and tried again, with beautiful results. I, on the other hand, slammed the book shut, poured up a double bourbon on the rocks, and spent the next hour mumbling passive-aggressive epithets about how baking isn't real cooking anyway. (This may help explain many, if not all, of the dating traumas in my pre-married life. At the very least, it gives you a new appreciation for what the Golden Spouse must endure and what a kindly soul he must be.)

Thanks to Ashlee, I know what to do differently with the next loaf.

Honestly, though, I don't know that there will be a next loaf. I just wasn't that wild about it. Part of it is the chocolate thing (I don't like chocolate desserts), part of it was the texture (like a wet sponge). But the Golden Spouse said it best when he described it as a "dessert with an identity crisis" -- it didn't know whether it was a banana dessert with a complement of chocolate, or vice versa. It didn't balance well.

I bet Ashlee's balances well. I'm sure Ashlee's loaf is perfect. It's the Homecoming Queen of Black and White Loaves. Mine was the flute player loaf in the marching band who is also on the newspaper staff and in the math club, but is really a great loaf if you just take the time to get to know it.

Two side notes: There was one deviation from the recipe, of course. I didn't have dark rum -- so I added some molasses to gold rum and used that instead. It was fine. It is also now moot, since omitting the rum was one of the changes Ashlee made to her perfect loaf.

Second -- a lot of bloggers have lessened (or even eliminated) the nutmeg. I am horrified by this. I could never endorse such a practice. I love fresh nutmeg. 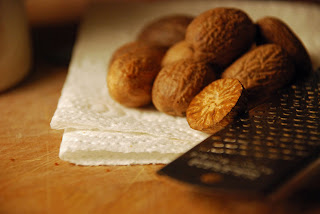 BONUS!! As promised, I did go back and try the Summer Fruit Galette, using Farmer's Market peaches, and it really was delicious. The custard makes all the difference in the world. For the jam layer, I used a fig spread that I made with figs from my very own tree, and the flavors paired beautifully.

My crust dough was a bit too wet, though, so folding the edges over was a gooey mess. I will definitely do this one again (but with drier dough next time). And Dorie's pie crust recipe continues to be a huge hit with the GS.

Next week: Dolores of Chronicles in Culinary Curiosity has selected Blueberry Sour Ice Cream. YAYAYAY!!!!! Too bad blueberry season has passed here... the first picking was amazing.
Brain dump by Kelly at 9:33 AM

hey i think your marbling looks FINE..perfection is overrated. :) i did a bunch of variations which was fun and as long as it TASTES good, i mean who really cares about presentation right? (so i say yet i am the one up at 7am taking photos of my loaves in natural light).

Your loaf was the flute player, mine was the girl tuba. Because everyone knows the girl tuba is doing it for attention, only getting everything totally and completely wrong.

To be honest, I hated mine, too. And I saw that each slice has 400 calories in it, which just depresses me. For 400 calories, I should have an orgasm.

You sound like me. I thought about baking a second loaf to get it right, but it would have tasted them same – disappointing. That first impression was a deal-breaker. ;)

Sometimes, alcohol is better than baking. This might be one of those times :)

i'm with macduff. ditto everything she had to say!

Perfection is overrated, and you just know that the flute player is far more well-adjusted than the homecoming queen anyway. I think yours looks wonderful.

It's funny how different everyone reacted to the taste of the loaf. I really wish I'd had fresh nutmeg - maybe if I make it again. I really liked it but maybe not enough to be a "go to" cake.

I'm glad you reported on your further adventures with galette - the peach and FIG combination sound amazing. I used peach (with fresh raspberries) and they really did well with the pastry.

You're cracking me up with the "Homecoming Queen of Black and White Loaves". LOL

I think yours looked great...

What a great post. Your loaf certainly has been busy, what with the math club and the band and all. I also liked your DH's description!

I think your marbling looks very good! And I Looooove fresh nutmeg as well! I'm going to have to agree with you on that one!