YES, I did the TWD task this week. Stop yelling at me.

This week's recipe was selected by Dolores of Chronicles in Culinary Curiosity: Blueberry Sour Ice Cream.

When I first read the name of the recipe, I fixated on the "blueberry sour" part to the exclusion of the "ice cream" part and then totally dropped the context of baking. "WOOHOO!" I thought. "I love WHISKEY sours. BLUEBERRY sours must ROCK!! I wonder what the liquor is... blueberry vodka?"

And so easy... as I watched the lovely pink-purple mix swirling around the ice cream maker, I started to panic. I still had to blog... but nothing had gone wrong. No missed ingredients. No failed flames. No evidence of ineptitude whatsoever.

How could I blog without stories of averted disaster? It's like Mario Batali without the orange clogs! Julia Child without the drinking! Emeril without a list of 10,000 ingredients!

I stared. I fretted. I whimpered. And while I worried, I left it in the ice cream maker too long. 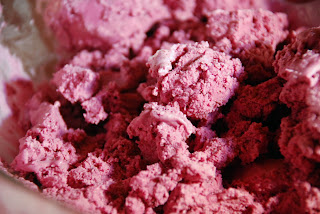 Failure at last! What a relief.

Do you remember astronaut ice cream? It was quite the fad when I was 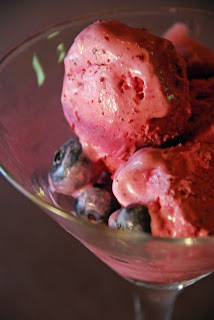 a kid (granted, I was a military brat, which sort of skews the repertoire of childhood experiences). Freeze dried ice cream -- that's what my blueberry sour ice cream reminded me of.

Fortunately, the texture improved as it melted. And the taste, as I mentioned before, was lovely. The sour cream added a flavor that wasn't really "sour" but softened the sweet edge a bit. (Maybe a TAD less sour cream would be appropriate -- it did sort of overpower the blueberries.)

Oh, funny - like waiting for the other shoe to drop: What could go wrong this time? Glad it wasn't a TOTAL disaster and that you liked it. I will cut the sour cream when I make this (I went with a rewind this time).
Nancy
The Dogs Eat the Crumbs

Wow - I must admit, I don't anxiously await mistakes, but I stress out about the most interesting way to present whatever I've made. Funny what blogging does to you!

I definitely think that this recipe is too small for most ice cream makers. I had much better luck when I doubled it. And as usual, you had me laughing--"Mario Batali without the orange clogs!"

Haha! Welcome to the failure club! Hopefully you can keep from putting down stakes here like I dud. :-p

Glad your ice cream came out passable and flavorful, even if it lacked something texturally@

I absolutely remember astronaut ice cream! Seriously, what was the point? Ick. Sounds like yours only resembled it in texture and not taste.

Totally distracted by the thought of blueberries and vodka...I'll have to come back and read the rest of your post.

You are so funny. I love your ice cream and I was surprised over the flavor and liking it. I doubled the recipe so mine tasted really like sour cream. The melting blueberry ice cream in the martini glass is so pretty.

I think you do have the other part of my kitty's family =D. I showed her and she sniffed at the monitor. . .too cute =D

such a good reminder - mine kind of had the texture of astronaut ice cream too, which was really disappointing! i should've eaten it immediately...which i'll do next time. that bottom photo, making my mouth water!

Oh man...whiskey sours. Yum. Is 8am on a Wednesday too early for one?

Hmmmm...blueberry sours, interesting. Nice color on the ice cream, and I'm glad it smoothed out a bit after sitting.

Mine had that same texture!! I totally should have added some blueberry vodka! Great post!

I think Mario's clogs are surgically attached to his feet. ;)

i in fact have two packets of astronaut ice cream at home right now! i liked the sour cream in this alot, too.

This looks beautiful! When I make it (that is when I get my icecream maker) I will put less sour cream in - quite a few bloggers found it to be too much cream.

Too funny! I too look for my errors, but the most stressful part is getting the photos.

I'm GLAD nothing went wrong; I still enjoyed your story.

I don't know if it's that I used fresh blueberries from the farmer's market or what, but I got brilliant blueberry flavor with just a hint of sour cream. Odd how we can all work with the same recipe and get such vastly different results.