It Isn't Really Baking Until the Smoke Alarm Goes Off

In our five years of marriage, the Golden Spouse has had to learn to smile through gritted teeth at many an eccentricity of mine, especially the one that involves impulsively launching myself (and my checkbook) into new activities but losing interest as soon as any real effort is required.
Because of this, "we" now have a room devoted to storing avocational debris: a glass grinder and dozens of sheets of art glass; a dress form (named Peg) that has been wearing a half-finished skirt for about a year; a Garmin GPS with a copy of "Geocaching for Dummies," etc.

Then there are the kitchen gadgets.

When I realized the tree in the backyard would bear fruit (figs), I bought a food dehydrator. At harvest time, though, the figs didn't just fall into bushels on their own, so the dehydrator was banished to a closet along with the yogurt maker, vacuum sealer, and electric marinator. (I was vindicated on this one, however -- when the Golden Spouse's iPhone went through the laundry, the dehydrator played a key role in our futile attempts to resuscitate.)

This week marks my first foray into the world of Tuesdays With Dorie, a community of bloggers who are methodically baking their way through Dorie Greenspan's baking Bible one recipe at a time.

Ta-da!! The dehydrator has been elevated from its lowly status as "yet another one of Kelly's silly impulse purchases" to "a critical implement in the arsenal of the power baker."

So now we're at the REAL point of this post -- the experience of baking the Apple Cheddar scones.

I started out with three challenges. First, the recipe calls for one large egg. I buy my eggs from the local Farmer's Market, and although they are by far the best-tasting eggs available, they are small -- so I used two.

Second -- I also buy my cheddar cheese locally. It's very soft -- so much so that when I shred it, it tends to clump together rather than showering delicately and evenly on whatever I'm adding it to. I solved this problem, though, by putting it in the freezer for a while before shredding it. 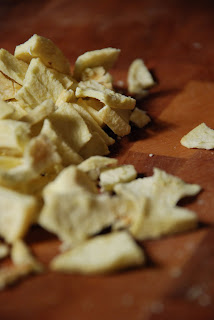 And last-- the dried apples (dried 'em myself with my own dehydrator) had the texture of apple chips. The recipe called for a "fine dice," but mine were more like a "dusty crumble." They TASTED good (take THAT, you gadget naysayers!) -- they just didn't seem to have the right texture for the recipe.

The texture of the apples didn't hurt the final product, though. The cheddar flavor was wonderfully subtle and balanced throughout, and the chewy bits of apple provided a nice little burst of flavor.

The extra egg made the dough a little too moist, so rather than getting scones with a smooth top (like the picture in the book), they had the rough finish of buttermilk biscuits (only with a little more spread to them). Also, they didn't rise much (my baking powder may be too old), so they had the density of foccacia.

Another factor that could have hurt the airy quality of the final product (and here's where the smoke alarm comes in) -- during the baking, some of the butter oozed out and dripped onto the floor of the oven, which - duh - created a lot of smoke. I had to take the scones out, wipe down the oven, then put them back in to finish cooking.

Even with these mishaps (and I will continue to call them "mishaps" rather then "errors of inexperience" because it's my blog and I can cry if I want to, stop judging me), the scones were really quite good. I added a pat of butter because it makes for a prettier picture -- but they were plenty buttery without it. 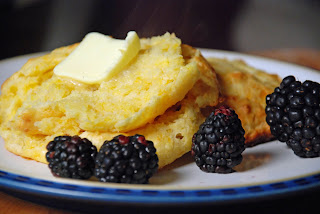 So here's what I'll do differently before adding these to the menu of the Groggy Dog (the imaginary bed and breakfast we pretend we're going to open in New England):
One recipe down -- hundreds to go. Hopefully, upcoming baking activities will involve homemade yogurt, vacuum sealing, and intense marinating, so I can justify returning to my gadget-buying ways (I have my eye on a thumb-operated salt grinder).

NEXT WEEK: Double crusted blueberry pie!!! GS is excited about this one.
Brain dump by Kelly at 3:00 AM

Great writing and great photo. Wish we were there to confirm the great cooking.

Hahahah I am also the queen of smoke alarms and kitchen fires. Welcome to TWD! I love that picture with the blackberries!

Welcome to TWD! Way to persevere ;) The dough was *really* sticky for me, as well, so I doubt it was all due to your extra egg.

Ha! Too funny. Welcome to TWD. I imaging opening a B&B or a boarding house, not that I have even bothered to share this with the hubs...we are millions of miles away from doing anything like that. I liked the berries on the plate. The scones looked great.

Nice! As Nick says, "You know Mom's cooking when the smoke alarm goes off."

Oh, the memories that your smoke alarm story have triggered for me . . . . And welcome to TWD!

Love the post and your writing style. Thanks for making me smile and WELCOME to TWD.

Great photo...and you are right, the butter melting on the scone is a perfect touch.

Great job on your first TWD recipe. I love the way you wrote about it. Welcome to the group!

ha! great post. you had me at the smoke alarm going off;) your scones look lovely. welcome to TWD!

You've just created a new food concept for the Groggy Dog that will be all the rage: smoked scones!

I feel for you... I inherited my father's food dehydrator, his electric juicer, and no less than three counter top roaster ovens. Fortunately I have storage space.

Welcome! Your scones look lovely and I giggled all through your post.

Suggestion for food dehydrator (when not rescuing iPhones) -- buy lots of cherry tomatoes when they are in season, cut in half, and dry. Much cheaper than buying sundried tomatoes and they taste great!

I have days where I shouldn't even be allowed in the kitchen and TWD scone day was one of them. Yours look great!