I successfully completed my second Tuesdays with Dorie baking assignment. I'm two for two!! If only my commitment to regular exercise and getting enough sleep had lasted this long.

This week's recipe, selected by Amy of South in Your Mouth, was the double-crusted blueberry pie. I now love Amy. Amy is my new best friend, except without the regular communication, hanging out, knowing-each-others-last-names part of it.

I love pies -- I'm a Suth'n Gal, too, after all -- but I have a love-hate relationship with pie crusts. Specifically, I love Pillsbury and hate making them myself. The day Pillsbury started packaging their All-Ready Pie Crusts in rolls instead of folds -- I admit it, I cried. I'm not proud. It made it easier to pass the crusts off as homemade when I didn't have to explain the crease in the middle. 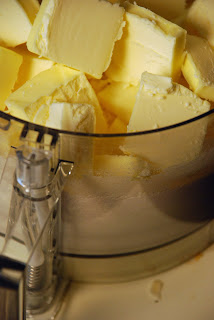 But I wasn't about to cheat in my TWD participation. Of course not! At least, not in Week Two! So I took on the crust, too.

Good Lord... the butter... I could have sculpted the Pieta with the amount of butter this recipe called for. But it rolled out like satin and tasted like cookie dough, so Dorie must be on to something.

In fact, after I assembled the pie and loaded it up into the oven, I decided to see just how similar to cookie dough it was.

As you may recall, my first TWD experiment (way back in the... well, last week) almost ended tragically when butter dripped from the lip-less pan onto the floor of my oven (okay, so it wasn't all that hazardous, it could have been). Having learned from that experience, not only did I put the pie on its own cookie sheet before sliding it into the oven, I put a bigger sheet on the lower rack just in case the blueberry juice got out of control.

After that, it made perfect sense to me (given the length of my attention span) to form the crust scraps into little disks, sprinkle them with cinnamon and sugar, and slip them onto that extra baking sheet to test the cookie theory.

You're all much more alert than I am, so you've undoubtedly already caught on to the flaw in this plan. As the "cookies" heated up, the butter seeped out.... the cookie sheet (same one as before) had no lip... yadda yadda yadda. 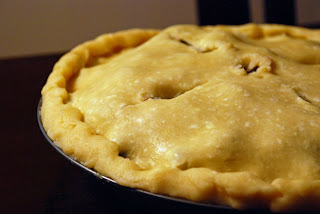 Fortunately, I caught on before the butter trickled off the pan, making me the next Darwin Award nominee.

Just LOOK at that crust. You can see the bits of butter.

Forty-five minutes later (I didn't need the entire hour the recipe recommended), I pulled the finished pie out of the oven and left it to cool. After the recommended thirty minutes, the pan still felt warm. Even after an hour, it was warmer than I would like, but darn it, I wanted some PIE.

The Golden Spouse came out of his Man Cave long enough to get the first piece, then quickly retreated lest he miss the shortstop spitting or the second baseman denying rumors of infidelity. He came back even before I got the second piece out -- to tell me how wonderful the crust was.

If GS is willing to separate himself from the Yankees-Red Sox game when they were tied 4 - 4 and about to head into extra innings just to tell me how much he likes the crust -- that's got to be a pretty special crust. 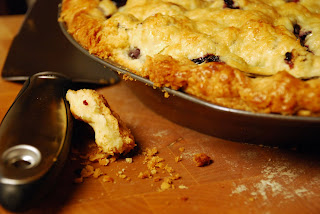 And it was. I'll never go back to Pillsbury. I've already broken up with them on their MySpace page -- I'm THAT serious.

The main thing I learned from this assignment was that nifty trick of adding a layer of breadcrumbs before pouring in the filling in order to keep the bottom crust from getting soggy. Several comments on the main site talked about substituting a sweeter crumbled cracker or cookie -- that made sense to me, especially since the only breadcrumbs I had were seasoned, so I added a layer of brown sugar instead.

Yep. You read that right. In my continuing subconscious effort to maintain my reputation as inept but enthusiastic, I layered brown sugar instead of the graham cracker crumbs I thought I was using. (They are both stored in vacuum-sealed mason jars. They look a lot alike. I was tired. There were shiny things off to the left.)

Fortunately, I discovered the mistake before pouring in the blueberries, so I was able to dump most of it out and get the layer of graham cracker crumbs in place. So there.

This pie is as tasty as it looks. It's quite a testament to Dorie's recipes that even *I* could pull this off.

I think this recipe would make it onto the menu of the Groggy Dog -- but we'll leave the pie crust cookies off. 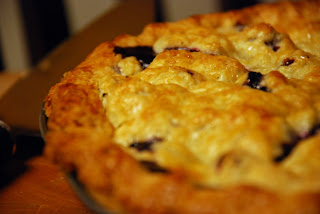 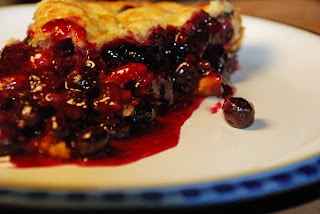 Your crust looks beautiful! I've got to try this one.

Great job! I'm glad she converted you. Homemade is the way to go and totally worth it with pie crust. Your pie looks awesome.

My mother recently told me that she hadn't made her own crust in many, many years. Pillsbury had been seeing her behind my back. The news was actually very liberating.

Thanks for the kind words!

Sorry about your doughboy break up, but you're on to bigger and better things.:) Your pie and crust look sooo very lovely.

Homemade is the way to go! Great looking pie and I lol about the Red Sox Yankees game, my hubby tore himself away for the pie too!

god you crack me up. i laughed all the wat through this post. love the best friend part...too, too much. oh, and good lookin' pie too!

You have a wonderful style of writing...and your baking looks very wonderful, too. Fun post, great photos!

Love your writing style. THanks for making me laugh out loud while reading about pie and crust! I love the part about you breaking up with Pillsbury! Great job on the pie.

Congrats on your 2nd completed TWD. Thankfully I lined my pans because there was definitely a lot of bubbling. Your pie looks great!

I would have totally done the same brown sugar/graham cracker mistake. I've done the baking powder/soda mistake and didn't find out til everything was baked! Great job!!!

What an adventure! You did great and don't worry, by a couple months in, you'll won't want to buy anything and pass it off as your own because yours will be better and it'll be easier.

I'm new to TWD, too. Your pie and pics look incredible!!

The Queen of Quite a Lot said...

Your pie is gorgeous! Congratulations on your break up with Pillsbury.

Congratulations! Your pie looks great and I love your sense of humor.

Brown sugar? Oh, that wouldn't have been good! Gorgeous pie. How did the graham cracker crumbs work? Were the detectable in the final product? I didn't even notice the breadcrumbs after the fact.

There was something odd about the texture, but I don't think it was the graham cracker crumbs.. it may have been too much flour.

I'll bake and eat a few more to make sure -- I'm nothing if not totally committed to science.