In Which Chocolate is Melted, Divorce is Threatened, and I Ask My Dog How Many Fingers I'm Holding Up (TWD) 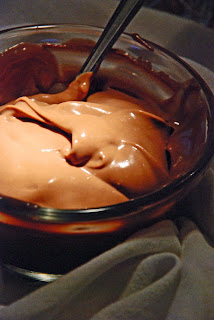 Pudding is not funny. Nor is it photogenic. You've been warned.

This week's Tuesdays With Dorie assignment is chocolate pudding. I don't really like chocolate desserts (please don't send me to Gitmo), but the Golden Spouse does, so this effort was really for him. It's a good thing, too -- he spent a good chunk of time cleaning the kitchen and threatened me with divorce if I didn't leave it exactly as I had found it. Distracting him with some chocolatey mouthjoy might make him overlook my half-assed counter-wiping.

I wish I had read the other bloggers' comments before getting started. If I had, I would have been prepared for the fact that my food processor isn't big enough to mix as much liquid as we had to deal with. I poured the mix in, switched it on, then turned back to the stove to check on the melting chocolate.

When the frothy liquid started leaking out and dripping off the counter, ever-alert Jack the Beaglador was there to lick it up.

I panicked a little bit. Chocolate is toxic to dogs. Sure, the mix didn't have a lot of chocolate in it at that point, and it was just cocoa powder, but I have no idea how much chocolate was too much. I got down in Jack's face, staring intently for any evidence that he was losing consciousness. I even waved my hand in front of his eyes: "How many fingers am I holding up?" 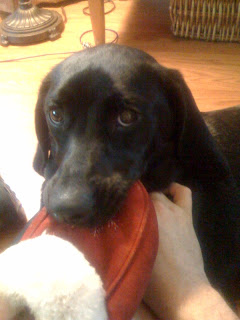 He looked at me like I had lost my mind, then went to lie down on his bed. (Here he is, with a newly-nicked houseshoe. SEE what I have to deal with?! Is it any wonder he's an undisciplined mess? How can you scold THIS FACE??!!)

The other problem I caused for myself was in the heating of the liquid once it was mixed. You're supposed to stir it constantly over medium heat while it thickened -- so I did. But it never got any thicker, and I certainly didn't see the little bubbles popping on the surface.

It turns out that I left out the "medium heat" part. I thought I was turning off the flame under the double boiler in which the chocolate was melting, but it was still on. Ergo...

Once I turned the heat back on under the pudding, it thickened and bubbled up nicely.

(Did I mention that I had to use semi-sweet chocolate instead of bittersweet? Yeah. I did. Because I can never seem to do anything the conventional way, at least not on the first try. Relax, I reduced the sugar and it was fine.)

I'd have to say that the end result was a resounding success -- I guess. I don't really like ...well, you know. GS loved it (and Jack wanted more).

I don't think it will make it to the menu for the Groggy Dog, though. This may be blasphemous to say -- but it was a lot of effort for very little payoff (i.e., not that much better than recipes that leave fewer implements to clean). 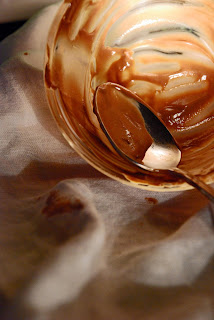 Forgot this part: This week's recipe was selected by Melissa of It's Melissa's Kitchen - check it out, she figured out how to make the pudding look pretty!

Glad you (and the dog) liked it! I used a stick blender for much less mess, and some other posters said all you really need is a saucepan and a whisk...so I hope you'll give it another whirl, so to speak...

If pudding (and this post) isn't funny, I don't know what is. Fabulous

Sorry you had a mess, but the resulting post sure was funny!

I've decided to make peace with whatever my dog eats, as long as it isn't broken glass or arsenic.

My husband is the real chocolate fan here. I think the pudding made up for weeks of fruit desserts.

I had such a mess too. Glad you liked the pudding!

Nice job on the pudding, even if it isn't quite your thing. I had problems with the food processor, too. Mine's an 11-cup, so I thought I'd be okay, but the liquid sloshed all over the place.

So sorry it wasn't your favorite. I just used a whisk and skipped all the other steps (because I only have a tiny food processor). Anyway, it looks good and creamy.

Your pictures are great. I love the lighting in the first one!

Glad your dog didn't get enough chocolate to hurt him. He's a cutie!

The empty bowl is a tell-tale sign that this one was a success. Glad Jack survived his encounter with half-cooked chocolate pudding. And that your marriage is still in tact.

Yours looked incredible. Chocolate is a staple in my life, almost has its own food group! Your pup is absolutely adorable!